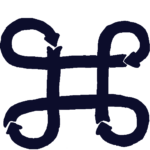 The phrase mene mene tekel upharsin appears in Daniel 5. It appeared on a wall in the palace of Belshazzar, the acting king of Babylon, who was unable to comprehend it. Daniel was one of the captives from Judah brought to Babylon by Nebuchadnezzar, and was given wisdom from God to read and translate the words, which meant “numbered, numbered, weighed, and divided.” Daniel told the king, “Here is what these words mean: Mene: God has numbered the days of your reign and brought it to an end. Tekel: You have been weighed on the scales and found wanting. Peres: Your kingdom is divided and given to the Medes and Persians” (Daniel 5:26-28).

The biblical account of the mysterious and frightening appearance of the phrase mene mene tekel upharsin has given rise to the modern expression “the handwriting on the wall,” meaning “a portent or warning of inevitable misfortune.”

Phrases like these become potent signs and reminders of actions, intentions, and their effects. As much as they serve as an indication of impending adversity, they also bring with them a possibility of a change and redressal towards the current state of affairs. It becomes a point at which an inevitable reconciliation happens, that pushes one at an edge of many ‘re(s)’- revision, repair, recreate, renewal, restoration, and a frequent ‘coming back to’ while looking forward. Graffiti laden walls in the University are a similar sign like an apparition. It was pushed to imperceptibility by some or, painted over in the name of wall deterioration, safety, and beauty by others. These acts unconcealed the wall as a porous, active agent for various negotiations and interventions to take place.

As much as the walls mark an edge, the writings and images on them also become a tool for discourse and representation in Ambedkar University, Delhi (AUD) for various marginalized student communities. Simultaneously, they also bring in questions about the nature of different public spaces. After the erasure of all graffiti around October 2019 by the administration at the Kashmere Gate campus of AUD in the name of safety, we began researching on campus walls, collected old pictures of the walls since 2015 from different sources, and took testimonies and memory drawings of different stakeholders. The collated material eventually took the form of and got  reenacted through different fables for the Students Biennale display. The fables are an ensemble of historicity and contemporaneity of this particular ‘lived space’, dealing with its human-non-human interaction, authorship, accessibility, and dissent in the larger socio-political milieu, resonating with similar incidences across time-space. We see the signs and traces as becoming the many ‘what ifs’ like Daniel’s prophecies through our facto-fictional narratives.

We are thankful to our mentors Santhosh S., Sabih Ahmed, Vasudha Thozhur, Subhashim Goswami, and Shefalee Jain for their guidance and support at different points in time.

The possibility of imagining a virtual display could not have been bridged without the help of faculty member, Kaushal Sapre who has been a constant support. We are equally thankful to Ebaad Ansari for providing technical guidance and agreeing to help us at such short notice. Their constant availability and patience at all times has been crucial to the building up of this website, right from the scratch. We would also like to thank Prabhakar Deep Tirkey and Navroop Singh Manku who very kindly helped us with the making of the 3D model, and Mehul Singh who helped us in the documentation of the project.

We are grateful to the Student Biennale team, FICA, and our colleagues from Jamia Millia Islamia, Yusmarg Collective, University of Kashmir, and MS University, Baroda for the insightful discussions we had through the Forums where we were able to unpack some common concerns over the past few months.

Finally, we thank all the faculty members of SCCE, the administrative and non-teaching staff, and especially the student body of Ambedkar University Delhi for their support and contributions at various stages of this work.

FORUM ANNOUNCEMENTS
Watch this space for online forums, where we intend to invite students from other universities, architects, sociologists, artists, lawyers, activists, scientists etc. Here, our aim is not only to present our project but also further it through discussions that resonate across various registers- local, institutional, national, class, caste and gender. Our goal is not just to unravel the actual intention of the university administration regarding the ‘repair’ of walls, but also to understand the aspects of structural safety and material strength, cases in the past and present, socio-political implications in greater depth by opening out the field. The field for us is also a space to understand the nature of Public Spaces in India today, with respect to ownership and its various stakeholders. Stakeholders, not just the guards, cleaners, food vendors, but also the century old trees, and animals usually found in university spaces like cats, dogs, monkeys, insects, birds etc. How do we understand the ‘commons’ today? What do the acts of beautification and gentrification mean for its various associates? Which active forms can be designed to enable a greater and more porous dialogic space?