This project proposal is written for the  visual art display at the university campus space which is yet to materialize due to the lockdown crisis.

Concept of the display and the material created and collected

The visual display will focus on exploring the notions of commonalities reflected in a Puja Ghar – worship shrines at Hindu households.

For my dissertation thesis, I have been typologically photographing puja ghar, focusing not only on its aesthetical but also unearthing the partitioning of sensible and it’s associated political. In the ongoing research work, the deconstructing of the private space of worship has led to un-layering of the elements which are rooted in the structures (or the common sensible) of geography, caste, sub-caste, economy, and so on which can be visualized in the aesthetical of the worship space.

Over the past few months, alongside photo documenting, I have been regularly visiting the Yamuna ghat near Kashmere Gate, Delhi. The purpose of the visits is to analyze the discarded and at times damaged iconography of Hindu gods and goddesses left on the river bank. The left imagery which is in the form of photos, calendars, idols made of marble, clay, plastic, ceramic tiles with images of gods and deities, paintings.  Along with the imagery I have also found artifacts associated to a puja ghar like lamp holders, aggarbatti stand, garlands made of plastic, religious scriptures, wooden stand to keep scriptures.  Since it is nearly impossible for me to visit a relatively larger number of households, the found iconography has given me an insight into those households of Delhi region which have chosen Yamuna ghat as their preferred spot to be unattached from these religious icons.

Since the found iconography on the river bed is of immense interest to me, I started to frequent my visits to Yamuna and kept on bringing back the found iconography and artefacts. It became a ritual to place, organize, arrange, select, deselect, look for more, note down what’s missing in the studio space at the campus and to explore different forms and arrangements based on a logic of deductive reasoning of sorts. This became an ongoing exercise – which helped me understand and familiarize with the found objects, to discover or even locate any possible common sensible(s) from the arrangement till the inevitable lockdown struck upon.

During my visits to the Yamuna bank, apart from collecting the imagery, I came across a community – which to me was another partition in the sensible. This community dwelled on the river. River provided these settlers a space to sit in the winter sun, light fire to keep them warm, and sleep covered in a blanket – from head to their toes. The river seemed to extend itself from gods and their images to this community, both finding a respite near the still Yamuna.  (images attached below)

Exhibition display and the space selected

The display will actualize in an enclosed room like space of size around 8 meters x 10 meters. In the space, the collected imagery and iconography will be arranged in multiple sets of commonalities. The idea is to showcase different kinds of arrangements displaying – common-sensible(s), the partitions dividing multiple common-sensible and if possible creation of a new sensible.

Since the process of collecting the imagery and religious artifacts was still ongoing, and I was yet to avail the opportunity to arrange the material in the desired space before the crisis occurred, on the basis of my understanding of the collected material, I could consider some hypothetical arrangements to be curated for the display. The imagery can be commonized and categorized as per the Hindu traditions – Vaishnavism, Shaivism, Shaktism. It can also be arranged per the traditions and cults associated with local deities in the region. Apart from this, a redistributed sensible can add diversity to the arrangement, which can be displayed by exhibiting a cultural intermingling of religions and traditions.

The framed images, icons, calendars and artefacts can be arranged and kept in a cupboard like structures to hold the arrangements in their segregated compartments. The cupboard like structures can be kept along one of the walls in the space. In the middle of the room on a high stool, I plan to keep an empty puja ghar in its structural form. This would be symbolic of a religious space which is neutral to the partitions of the sensible in terms of its materiality, but still structurally a part of the religious-political.

On one of the other walls I will display the framed photos of puja ghar which are created as a part of the artistic research. The set of ten photos would be classically arranged in two rows of five photos each. Another wall will be utilized to project the images of settlers sleeping, created at Yamuna ghat.

The space will be warmly lit by artificial lights and the possibilities of natural light will be reduced by cutting off the natural light inlets. Apart from this, there will be shoe rack like box kept on the doorway –hinting the visitor of the associated ritual, but removing of shoes would be on the one’s discretion. There will be a foot light outside the entry to the space which would function on the embedded coding that will respond to the visitor’s presence. 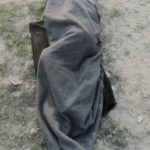 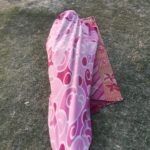 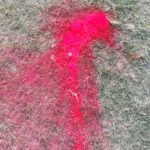 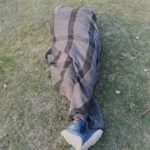 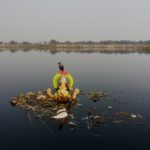 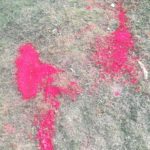 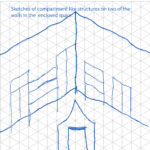